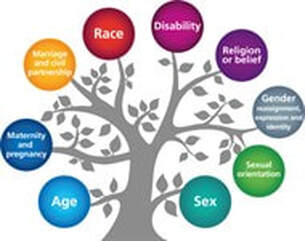 ​To meet the obligations placed on public bodies by the Equality Act 2010 and associated regulations, the Moray Integration Joint Board (MIJB) must publish a set of Equality Outcomes at least every four years.
In the exercise of their functions, the Board must have due regard to the need to: The Equality Act 2010 provides a legal framework to protect the rights of individuals and advance opportunity for all.  There are 9 protected characteristics which makes it against the law to discriminate against someone because of; age, disability, gender reassignment, marriage and civil partnership, pregnancy and maternity, race, religion or belief, sex and sexual orientation.
In April 2018, the Fairer Scotland Duty, under Part 1 of the Equality Act 2010, came into force across Scotland. The new duty places a legal responsibility on public bodies to pay due regard to how they can reduce inequalities of outcomes caused by socio-economic disadvantage when making strategic decisions. Public bodies are required to publish a written assessment showing how they have fulfilled this duty.

The revised Equality Mainstreaming Progress Report 2019-21 and Appendix was approved by the Board on 29.04.21.